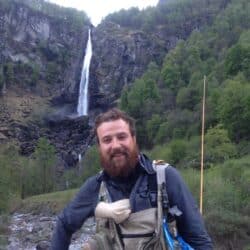 Jack grew up near the River Wandle in South London and has lived by, played in or worked on rivers for most of his life.

Having spent a lot of time in academia, Jack is now a Project Officer in the Restoring Rivers and Catchments Team working on a range of projects across the Trust’s catchments.

When not working on rivers, Jack might be found variously fly-fishing, walking or camping alongside them. Wherever you find him, you will almost definitely find him talking about them.

Back to the team page